The largest city in the Americas, São Paulo, Brazil is reporting a dramatic increase in hepatitis A cases this year according to data released by the Municipal Health Secretariat earlier this week. According to a local media report, between January 1 and September 16 of this year, the city recorded 517 cases of hepatitis A.

There are no current tropical storms.

Pennsylvania, USA – A severe thunderstorm hammered western Pennsylvania Thursday evening, bringing with it flash flooding that shut down low-lying roads throughout the area. Severe thunderstorms walloped the Pittsburgh area Thursday afternoon and evening. The storms downed wires and trees and flooded roads across Allegheny County when it hit just after 4 p.m., according to initial reports.

India – Several northeastern states are taking stock of the situation following incessant rains over the last three days, which have triggered flash floods and landslides. The swollen Khawthlangtuipui river has submerged over 350 houses in Tlabung sub-division in Lunglei where eight persons died after flash floods caused by heavy rainfall wrecked havoc yesterday. Officials estimated that over 2,000 families were affected by the floods. The whole of south Mizoram – Serchhip, Lunglei, Lawngtlai and Siaha districts and eastern Champhai district bordering Myanmar remained cut off from the rest of the country for the third day today due landslides at many places. Around 10 buildings have submerged in the swelling waters of the Tlawng river. In Assam, the districts of Lakhimpur, Darrang and Hailakandi have been hit by floods affecting nearly 14,000 people in 39 villages there.

The week’s coldest temperature was minus 99.0 degrees Fahrenheit (minus 72.8 degrees Celsius) at Vostok, Antarctica.

A blaze which started in the Du Toitskloof mountains in Paarl in the Western Cape in the early hours of Tuesday morning has already ripped through about 250 hectares of land, destroying nine cottages and two guest houses along the way, fire services have confirmed.

6.2 Earthquake hits near the east coast of Honshu, Japan.

Bagana | Bougainville (Papua New Guinea): Based on analyses of satellite imagery and model data, the Darwin VAAC reported that during 28-29 October ash plumes from Bagana rose to an altitude of 2.1 km (7,000 ft) a.s.l. and drifted W.

Colima | Mexico: Based on satellite images, the Washington VAAC reported that on 30 October an ash plume from Colima rose to an altitude of 4.3 km (14,000 ft) a.s.l. and drifted SW.

Dukono | Halmahera (Indonesia): Based on analyses of satellite imagery, information from PVMBG, and model data, the Darwin VAAC reported that during 26 October-1 November ash plumes from Dukono rose to altitudes of 2.1-2.4 km (7,000-8,000 ft) a.s.l. and drifted NE and E.

Cleveland | Aleutian Islands, Alaska: The Alaska Volcano Observatory (AVO) lowered the alert level to “yellow” after no activity has been detected at the volcano since its last eruption on 24 Oct (a small explosion). According to AVO, “recent satellite views indicate that the lava dome emplaced in late May was mostly destroyed in the explosion and has been replaced with a deep pit within the summit crater.”

5.4 Earthquake hits the Pagan region in the North Mariana Islands.

5.2 Earthquake hits off the east coast of Honshu, Japan.

Two 5.1 Earthquakes hit off the east coast of Honshu Japan.

New research confirms the likelihood of a Gulf Stream slowdown in the North Atlantic. Scientists suggest the phenomenon will spare Europe from the worst of global warming.

Thermohaline Circulation is a massive ocean current system that carries warm water from the tropics north toward Europe. As water evaporates in the North Atlantic its salinity and density increase, and it sinks, cools and is carried south again.

Some researchers have speculated that a slowdown could precipitate an ice age in Europe.

The slowdown won’t reverse global warming and plunge Europe into another ice age. Instead, it is expected to slow the rate of warming in the region. While the rest of the world warms more quickly, Europe will warm at a moderated pace. 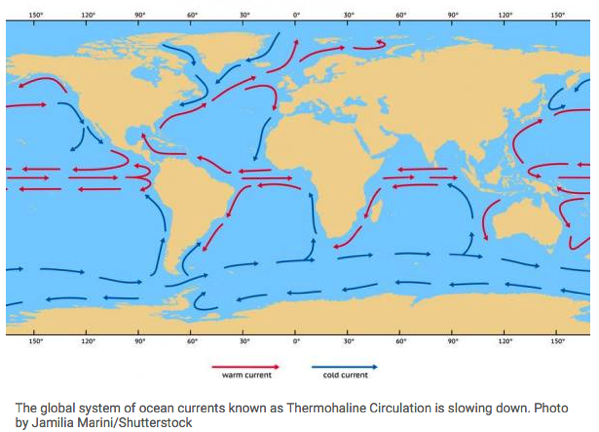 Several nature preserves around the Australian Capital Territory will be closed from late afternoon until dawn through Aug. 1 so as many as 2,000 eastern gray kangaroos can be killed.

Officials say an overabundance of the marsupials can have a devastating impact on the local environment.

But the cull has been denounced by animal-rights advocates who say the killing is cruel, and the methods used often cause the animals to suffer.

One of the strongest El Niños on record has left nearly 100 million people in southern Africa, Asia and Latin America with acute food and water shortages since late last year.

The ocean warming has also made many populations vulnerable to diseases such as Zika, according to various governmental, U.N. and relief agencies.

The U.N. Food and Agriculture Organization and the Famine Early Warning Systems Network said in a statement that rainfall in southern Africa “has so far been the driest in the last 35 years.”

Millions of other people in various parts of the world have suffered from heat waves, water shortages and wildfires since El Niño’s weather disruptions emerged in mid-2015.

El Niño’s warmth is fading across the Pacific, but its influence on the world’s weather will linger for months.

The growing Lassa fever outbreak in Nigeria has killed 101 people, as West Africa battles to contain a flare up of the virus, according to data from the nation’s health authorities released Saturday.

Nigeria Centre for Disease Control (NCDC) statistics show that reported cases of the haemorrhagic disease — both confirmed and suspected — stood at 175 with a total of 101 deaths since August.

While health authorities assure Africa’s most populous country of more than 170 million they have the virus under control, there are fears the actual scale of the outbreak is under-reported.

The outbreak of Lassa fever was only announced in January — months after the first case of the disease happened in August — with subsequent deaths reported in 10 states, including Abuja.

In neighbouring Benin at least nine people have died in a Lassa outbreak, with a total of 20 suspected cases, health authorities said Tuesday.

The number of Lassa fever infections in West Africa every year is between 100,000 to 300,000, with about 5,000 deaths, according to the US Centers for Disease Control and Prevention.

Lassa fever belongs to the same family as Marburg and Ebola, two deadly viruses that lead to infections with fever, vomiting and, in worse case scenarios, haemorrhagic bleeding.

S Pacaya (Guatemala): During our visit at the volcano this morning, the first direct observation of the crater was possible following a period of 5 days of bad weather. When we climbed the crater rim, we observed violent, continuous lava spattering from the central vent on an intra-crater cinder cone inside Mackenney crater. Activity was fairly regular in intensity, but went through alternating periods of stronger and weaker overall strength, lasting 10-20 minutes each. During the strongest phases, some stronger spattering events, resembling strombolian explosions (except that this activity was continuous), lava bombs were ejected to heights of 150-200 m, i.e. well above the crater rim, but mostly fell back inside. Only few fresh (days to few weeks old) bombs were seen on or near the (eastern) crater rim. Around the main vent at the bottom of the the approx. 100 m deep crater, a small intra-crater cinder cone, about 15 m tall, has formed, obviously containing a small boiling lava lake in its main vent. A small secondary vent is located at the eastern side of the cone and also showed spattering occasionally, mainly during phases of elevated activity at the main vent. Parts of the crater floor have been covered by presumably fresh lava flows.